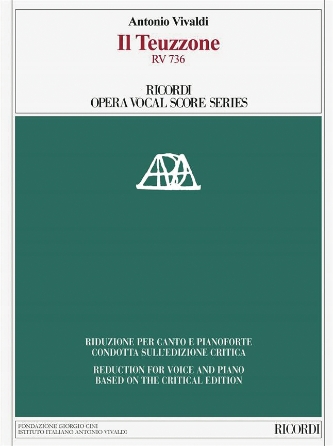 With Il Teuzzone, RV 736, the collected edition of operas by Antonio Vivaldi gains a new volume that brings to completion the pair of operas written by the “Red Priest” for Mantua. Premiered during the last days of 1718, the opera preceded by a few months the production of Tito Manlio, RV 738 (PR 1411).

This edition of Teuzzone, the first in modern times, is based on the two complete sources to have survived: a copy originating from the composer's own archive (Biblioteca Nazionale Universitaria di Torino, Raccolta Mauro Foà 33) and the one today housed in Berlin (Staatsbibliothek zu Berlin - Preussischer Kulturbesitz, Musikabteilung, N. Mus, ms. 125), Additionally, numerous secondary sources have been collated. An appendix to the volume contains the musical materials discarded by Vivaldi during the period preceding the opera's premiere.

The supporting texts for the edition report on new findings that have emerged from archival and documentary research. It has been established, for instance, that the aria Tu, mio vezzoso (I.03) is a borrowing from Alessandro Severo by Antonio Lotti, while the aria Tornero, pupille belle (II.02) is a reworking of Nelle mie selve natie, an aria in Scanderbeg, RV 732. These examples reveal the pasticcio-like nature of this Vivaldi opera.

In the section concerned with the description of the sources, which includes a meticulous codicological examination of the source in Turin, a bold attempt has been made to reconstruct the phases that the composition of Vivaldi's opera underwent, an operation that sheds light on the inner workings of Vivaldi's atelier. In addition, the close relationship of this score to a work with the same title staged in Turin with music by G. Casanova and A. S. Fiorè is analysed.

Il Teuzzone, RV 736 has been added to your cart

Due to high demand, Il Teuzzone, RV 736 is on back order