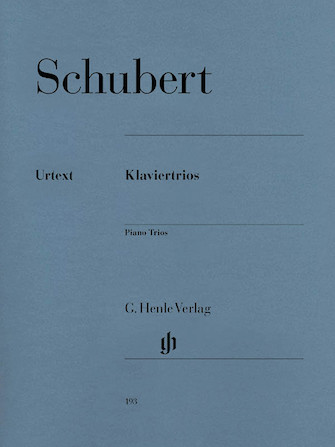 One needn't hesitate a second in assigning Schubert's two piano trios to his best works. Both were written no later than 1827, hence one year before the composer's death, and are typical of the works of his maturity: abounding in blissful melodies paired with formative power and profound depths of expressiveness. Whereas Schubert had sold the E flat major Trio op. 100 D 929 to the Leipzig publisher Probst (it appeared just after Schubert's death, however), the B flat major Trio op. 99 D 898 did not make it to publication during Schubert's lifetime.The Adagio in E flat major op. post. 148 D 897, which is reproduced in the Appendix and which has become known as Notturno, was most likely originally planned as the slow movement of the B flat major Trio. With its expressiveness ascending to darkest despair, Schubert possibly considered it as unsuited for publication.It was not published until 1846; in the Appendix of this volume one will find Schubert's first attempt in this genre, which he wrote at the age of 15 in Summer 1812.

Piano Trios has been added to your cart

Due to high demand, Piano Trios is on back order