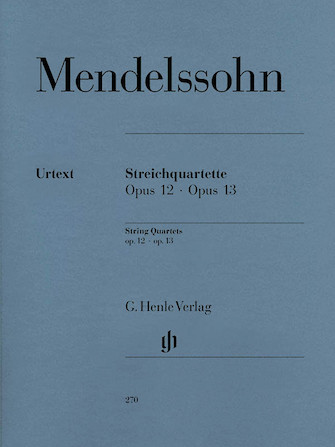 The string quartet is generally considered as the chamber-music genre of the classical era: invented by Haydn, elaborated by Haydn and Mozart, and brought to its compositional peak by Beethoven. All later quartet composers had to measure themselves against the works of these three masters. This applies first and foremost to Mendelssohn, who has always been called a “classical romantic.” His Quartet in A minor op. 13 in particular is said to have strong Beethovenian stylistic traits. It was composed in late summer and fall 1827, shortly after Beethoven's late quartets appeared in print, works that Mendelssohn was no doubt familiar with. The Quartet in E flat major op. 12 was written two years later, during Mendelssohn's first tour of England. A textually identical score of the two quartets is published in Henle's Study Score series (HN 9270).

Lift Thine Eyes to the Mountains (from Elijah) Choral

How Lovely Are the Messengers (from St. Paul) Choral

He, Watching Over Israel Choral

There Shall a Star Come Out of Jacob Choral

See What Love Hath the Father (from St. Paul) Choral

I Waited for the Lord Choral

And Then Shall Your Light Break Forth From Elijah Choral

String Quartets Op. 12 and 13 has been added to your cart

Due to high demand, String Quartets Op. 12 and 13 is on back order