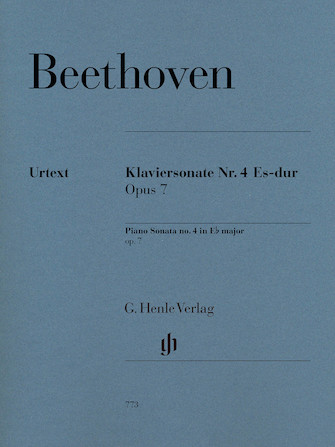 Carl Czerny wrote the following about Ludwig van Beethoven's Grande Sonate op. 7, published in 1797: “The epithet appassionata would fit much better to the Sonata in E-flat op, 7, which he wrote in a very impassioned mood.” As to whether the reason behind his passionate music was the composer's attraction for his then 16-year-old pupil Anna Luise Barbara Countess von Keglevich remains open. It might be that the dedicatee's father commissioned Beethoven to write the work for his daughter. We are publishing the sonata in a revised single edition by Norbert Gertsch and Murray Perahia – the introduction and fingerings were provided by the latter, one of the foremost interpreters of Beethoven's piano music.

Beethoven: Sonata No. 28 in A Major, Opus 101 Henle Music Folios

Piano Sonata No. 4 in E-flat Major, Op. 7 has been added to your cart

Beethoven: Sonata No. 28 in A Major, Opus 101 Henle Music Folios Add to Cart

Due to high demand, Piano Sonata No. 4 in E-flat Major, Op. 7 is on back order