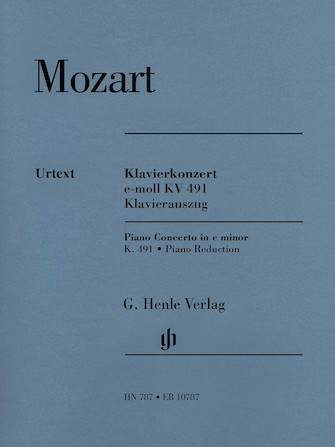 According to Mozart's own catalogue, K. 491 was completed on 24 March 1786 – it was Mozart's only piano concerto aside from K. 466 that was in a minor key. It was probably first performed two weeks later as part of an “academy” at the Burgtheater in Vienna. Mozart was extremely pressed for time while composing this work, a fact that is shown both by the cursory way in which the autograph was written and by the repeated corrections. Unlike earlier publications, Henle's edition contains the definitive version as in Mozart's manuscript. The piano reduction of Henle's edition was undertaken by the celebrated pianist András Schiff, who also supplied the fingerings for the solo part, the cadenzas and the lead-ins.

Piano Concerto in C minor, K. 491 has been added to your cart

Due to high demand, Piano Concerto in C minor, K. 491 is on back order