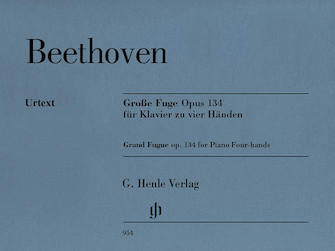 In his late work Beethoven devoted himself intensively to the forms of baroque polyphony. He originally composed the “Grand Fugue” as the final movement of the String Quartet in Bb major op. 130. However, according to one critic, the listeners of the time considered it to be “unintelligible, like Chinese.” At the urging of his publisher, Beethoven then replaced it with a newly composed closing movement for the quartet. In addition, he also made a version of the “Grand Fugue” for piano four-hands. The autograph of this arrangement was recently rediscovered. Courtesy of the Juilliard School of Music, Henle was able to consult it for the first time for their critical edition.

Concerto for Piano and Orchestra C minor Op. 37, No. 3

Works for Mandolin and Piano