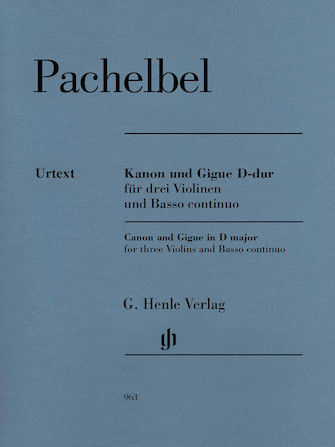 Johann Pachelbel, born in Nuremberg in 1653, a generation before Bach, is one of Southern Germany's most important post-Reformation organ composers. His compositions were already widely known at the time. The most popular work today is probably the canon with ensuing gigue in D major. The canon – according to the source “a 3 Violinis con Basso c.” – is built up over an ostinato bass whose two bar figure is repeated a total of 28 times. The following short gigue is also in a strict contrapuntal style. It is not known when the work was composed. As with most of his other chamber music works, Pachelbel might have composed it during his time in Thuringia between 1677 and 1695. This pleasing work is also popular with amateur ensembles.

The Swan from “The Carnival of the Animals” Henle Music Folios

Due to high demand, Canon and Gigue for Three Violins and Basso Continuo in D Major is on back order