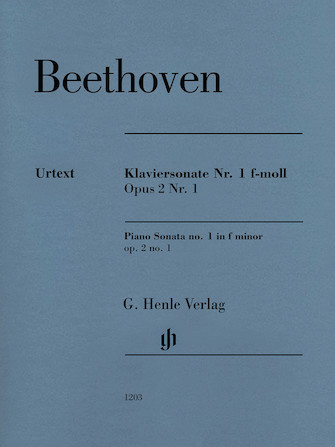 Beethoven's three piano sonatas op. 2 were the first works in this genre to which he gave an opus number, thus signalling to the musical world the special importance that he assigned to them. He wrote them during his first years in Vienna and, along with his op. 1 piano trios, they helped to establish his reputation as one of the most significant composers of his time. These three sonatas - all of them small masterpieces - are arranged in ascending order of difficulty and virtuosity. The four-movement Sonata in f minor is often called the “Little Appassionata” because it shares with the famous Sonata op. 57 not just its key, but also its impassioned mood - especially in the last movement. Murray Perahia's fingerings have been tried and tested over several decades of performing these works, and offer a new approach to these milestones of the piano repertoire.

Beethoven: Sonata No. 28 in A Major, Opus 101 Henle Music Folios

Beethoven: Sonata No. 28 in A Major, Opus 101 Henle Music Folios Add to Cart