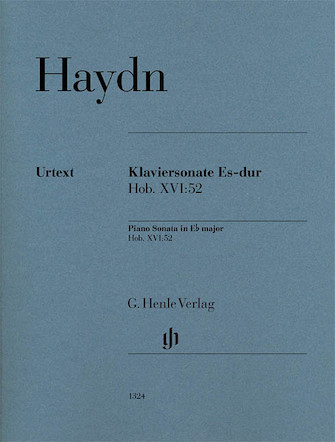 Haydn's E flat Major Sonata is connected to no fewer than two great female musicians and musical centers: according to its autograph it was written in London in 1794 for the pianist Therese Jansen, who was widely acclaimed there at that time. However, its first edition – from the Viennese publisher Artaria in 1798 – was dedicated to Magdalena von Kurzböck, who was among the leading female pianists of her time and numbered among the highest-ranking musicians of that royal and imperial capital city. Haydn knew both women, and even was a witness at the wedding of Therese Jansen and Gaetano Bartolozzi in May 1795. The term “Grand Sonata” – as it was called in its early prints – honors not only the scale and technical demands of the work, but also its tone. The impressive and imposing start to the opening movement makes it absolutely clear that this supremely effective work was conceived for the concert stage. The ethereal Adagio (with its harmonic shift to E Major) constitutes a meditative rest point before a Hungarian-inspired Presto Finale brings the piece to a rousing close. Our Urtext edition, edited by Haydn specialist Georg Feder, uses the musical text of the Haydn Complete Edition, supplemented with fingerings by Hans-Martin Theopold.