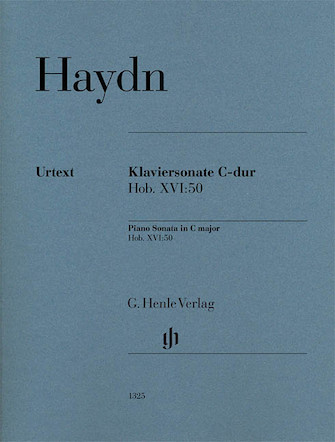 This piano sonata – probably Haydn's last – has unfortunately come down to us without an autograph. The composer in all likelihood offered the work and its publication rights to the London-based pianist Therese Bartolozzi (née Jansen). In any event, and no doubt feeling entitled to do so, she added the words “Composed expressively for and Dedicated to Mrs. Bartolozzi” before sending it off to print; in fact, she personally distributed the edition, published in London in 1801, in copies with her signature. Like its companion work the Sonata in E flat Major Hob.XVI:52, the C Major Sonata was written in London in 1794/95. However, its central movement is based on an Adagio that Haydn had composed in 1793 in Vienna, and which Artaria published around 1794. The variants contained in this early version are reproduced as Ossias in our Urtext edition, which is based on the text of the Haydn Complete Edition.

Piano Sonata in C Major, Hob. XVI:50 has been added to your cart

Due to high demand, Piano Sonata in C Major, Hob. XVI:50 is on back order