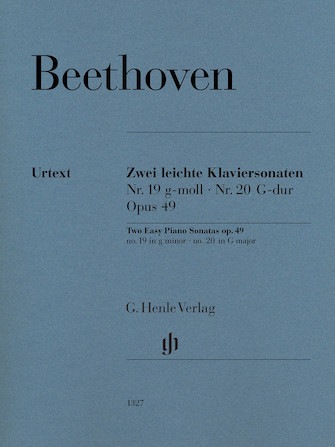 The two piano sonatas op. 49, described in their first publication as “Sonates faciles,” are often the first-ever Beethoven sonatas with which advanced piano pupils can demonstrate their ability. Their relatively high opus number is misleading, however, for both these two-movement works were composed at roughly the same time as the piano sonatas op. 10, between 1796 and 1798. The fact that they were actually published seven years later is presumably thanks to the business dealings of Beethoven's brother Carl, who initially offered them to several publishers without success. Finally, in 1805, a Viennese publisher relented and accepted them not yet aware of the treasures that had fallen into his lap. These little masterpieces, cast in an easily manageable format, soon became highly popular. This Henle Urtext edition continues our successful revised series of Beethoven's sonatas under the auspices of Murray Perahia and Norbert Gertsch.

Hallelujah From Mount Of Olives Piano

Brahms: At the Piano

Nights in the Gardens of Spain

First 50 Gospel Songs You Should Play on Piano