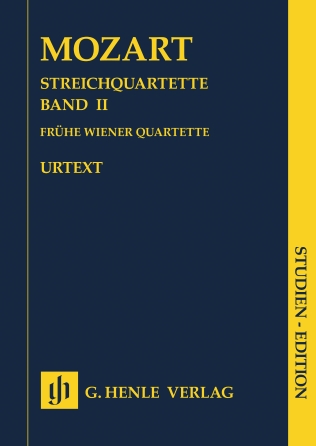 After Volumes IV and III of the series with Mozart's complete string quartets appeared as Henle Urtext editions in early 2017 and 2019 respectively, Mozart expert Wolf-Dieter Seiffert now presents Volume II. Included are the “Early Viennese Quartets” from 1773, K. 168-173. Entries in the autograph manuscript by the composer's father Leopold, however, suggest that the ordering of the six works into a unified series of quartets was his doing. In his preface, Wolf-Dieter Seiffert shares brand-new findings on the actual chronology of the genesis of these quartets. Moreover, he succeeds in correcting what in prior editions were occasional inaccuracies in dynamics and articulation, thereby producing a new, assured musical text. With artistic input from the Armida Quartet, Volume II of the String Quartets also sets the benchmark in the Mozart Edition!

From My Life – String Quartet No. 1 in E Minor Henle Study Scores

String Quartets Volume 2 has been added to your cart

From My Life – String Quartet No. 1 in E Minor Henle Study Scores Add to Cart

Due to high demand, String Quartets Volume 2 is on back order