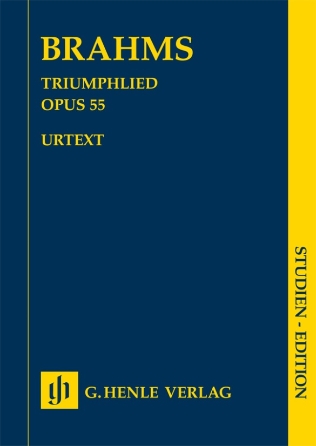 Brahms composed his Triumphlied for eight-part chorus, solo baritone and orchestra as a direct reaction to the victory of the German army in the Franco-Prussian War of 1870/71 and the consequent founding of the German Empire. Similar to the German Requiem completed shortly before, Brahms himself compiled the text from the Bible, in this case from Chapter 19 of the Book of Revelations. Because of the somewhat melodramatic tone of the composition and the nationalistic background to the works genesis, in recent years the Triumphlied has seldom been heard in concert halls. Unlike overly-patriotic occasional works such as Richard Wagner's Kaisermarsch, the Triumphlied is “true Brahms” and is a musically rich composition. This study edition takes the musical text from the Brahms Complete Edition (HL 51486030), thereby representing the highest scholarly precision. The Appendix contains an exciting new discovery, a previously-unknown early version of the 1st movement in C major, which was only rediscovered in 2012 in Bremen.

How Lovely Is Thy Dwelling Place (from Requiem) Choral

Triumphlied, Op. 55 has been added to your cart

Brahms: At the Piano Henle Music Folios Add to Cart

Due to high demand, Triumphlied, Op. 55 is on back order