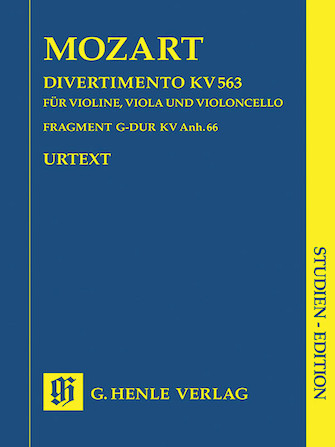 More than a few experts and aficionados count Mozart's string trio in E-flat major K. 563 among his most magnificent compositions. This masterwork, entered into Mozart's own catalog of works on 27 September 1788 as a “Divertimento,” presents the Urtext editor with great challenges. The autograph manuscript has been lost since that time, and no other first-rate source texts exist. The most reliable, albeit clearly imprecise, source is the first edition, published two months after Mozart's death. Many twentieth-century editions, however, unfortunately reprinted the musical text of Breitkopf & Härtel's so-called “Alte Gesamtausgabe” (Old Collected Edition), which was edited by none other than the violinist Joseph Joachim on the basis of incorrect copies and is therefore completely corrupt. Even the “Neue Mozart-Ausgabe” (New Mozart Edition) is not error-free. The Henle edition essentially follows the first edition, though aided by numerous corrective interventions, described in the Critical Commentary. The edition's Appendix presents the surviving fragment of the string trio movement in G major, K. Anh. 66 (562e). How unfortunate that Mozart never completed this equally wonderful music, which continues a little beyond the exposition and thus may quite aptly serve as a short encore. The three individual parts offer optimal flow for reading and playing thanks to the artful apportioning of notes in their layout, including, for instance, various foldout tables and individual pages left blank. The study edition (HN 9625), available separately, provides the full score to this edition of the parts.