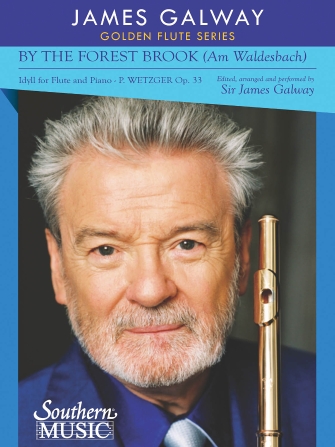 PAUL WETZGER (1870-1937) was a German flutist composer born in Dahme, near Lübeck. At a young age, he took violin lessons from the local music director, later switching to flute. By 15 years of age, Wetzger had played his first concert in the main church of Dahmen and was second flutist of the municipal orchestra. He later became solo flutist with the municipal orchestra of Essen and taught at the Essen conservatory. He wrote numerous pieces for flute and several chamber music works, also editing works by the French composer/flutist, Jules Demersseman. Wetzger's “Am Waldesbach” (By the Forest Brook), ideally for flute and orchestra or piano, was a staple of celebrated flutist Marcel Moyse, recorded by him in 1935 on the French Columbia label. Since then, it has become a favorite in the flute teaching repertory, perhaps most notably included Toshio Takahashi's famous Suzuki Flute Method. This Southern Music edition faithfully captures this classic piece as performed by living legend of the flute, Sir James Galway.

By the Forest Brook (Am Waldesbach), Op. 33 has been added to your cart

Due to high demand, By the Forest Brook (Am Waldesbach), Op. 33 is on back order