Adagio from Symphony No. 5 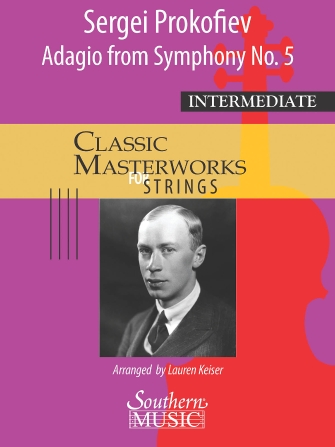 Adagio from Symphony No. 5

Prokoviev wrote his Bb symphony in short form within a month, 16 years after his last symphony. He used sketches he had compiled in his ubiquitous notebooks. Written in 1944, its four movements are in Bb Major, d minor, F Major and Bb Major (Bb chord) in a sequence of slow, fast, slow, fast. The Adagio is the third movement of the symphony. The music traces its roots to a score Prokofiev was preparing for a film of Pushkin's Queen of Spades that never reached production.

This arranged transcription requires an almost constant five-part textural environment. A challenge will be to merge the independent voices into coherent sections grasped by the players. Prokofiev's accompaniment lines are logical and embrace common musical patterns. They are somewhat relentless but can be learned without much difficulty. Because of the five-part texture, the performers are obligated to play the work with few breaks for rest. You may consider the work a young person's endurance test of a 20th century masterwork. Of course, this music was not available to school programs until now, so this will be an exciting adventure for you and your students.