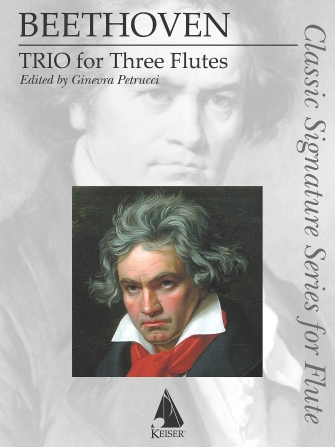 “The Trio for Three Flutes here presented appeared in 1964, when Jean-Pierre Rampal acquired a non-original manuscript of this work in the Czech Republic. Attributed to an early period for its light character and instrumentation, the Trio was taken into serious consideration by Beethoven scholar and redactor of arguably the most complete of Beethoven's catalogues, the chronological and thematic catalogue of all Beethoven's works, including the unpublished ones and the unused sketches (1968), whose 849 entries include the opus numbers, the Kinsky-Halm, the Hess, and the Grove catalogues. The Trio for Three Flutes is cited in the Biamonti Appendix II 64, as a work of uncertain authorship, but nonetheless attributed to Beethoven. The first recording of the piece was released by Jean-Pierre Rampal, who recorded the complete chamber works with flute by Beethoven for the Club Français du Disque label in 1964, together with Alain Marion and Christian Lardé. In lack of further information able to confirm Beethoven's authorship of this work, all that is left to the listener and performer is to enjoy the particularly brilliant vivacity of the composition, which may corroborate the hypothesis of a Beethovenian attribution.”

Trio for Three Flutes has been added to your cart

Due to high demand, Trio for Three Flutes is on back order