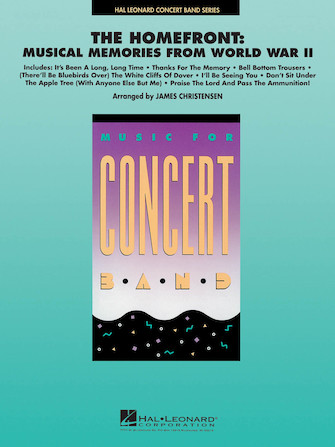 With the recent anniversary of the end of World War II, Americans have reflected on that special era in our history, a time when popular music played such an important role in the national consciousness. This outstanding showcase for band spotlights some of the fabulous songs of that era including: Thanks for the Memory, Don't Sit Under the Apple Tree, I'll Be Seeing You, It's Been a Long Long Time, Bell-Bottom Trousers, White Clifs of Dover, and Praise the Lord And Pass the Ammunition.

The Homefront: Musical Memories from World War II has been added to your cart

Somewhere in My Memory Young Concert Band Add to Cart

On This Day Arrangers' Publ Concert Band Add to Cart

Due to high demand, The Homefront: Musical Memories from World War II is on back order