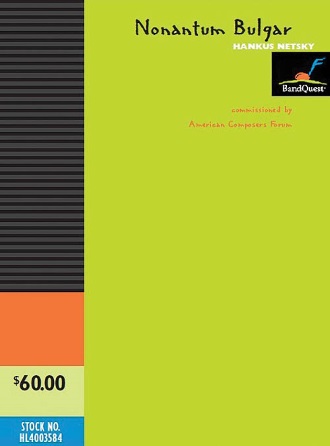 “I wrote The Nonantum Bulgar in response to a request for a klezmer-style piece for middle school band. Since my local middle school (F. A. Day) is located in close proximity to Nonantum, the oldest area of Newton, MA, I decided to imagine the dedication of the Adams St. Shul, our city's oldest synagogue, which took place around a hundred years ago (December 15, 1912). According to the Yiddish and English poster announcing the dedication, the event featured the a prominent Boston cantor and choir and a klezmer orchestra leading a 'Grand March' down Adams St. The piece tries to re-create what the klezmer band might have played on that occasion.

A Bulgar is a Romanian Jewish Dance that was very popular among Jewish immigrants at the beginning of the twentieth century. The trumpet solo that opens the piece is a typical rubato prelude, with the trumpet playing 'cantorial-style' Jewish ornaments, and phrasing in the manner of Eastern-European Jewish prayer leaders. Once the dance starts, the piece is underscored with a Romanian Jewish 'Bulgaresca' rhythm, heard in the trombone, snare drum, and tympani. The 'bulgar' section of the piece begins with a typical klezmer band orchestration of the time, featuring solo clarinet (played with a somewhat nasal tone), trumpet (or, even more ideally, cornet) trombone, saxophone, tuba and percussion. The percussion section is prominently featured in the third strain. In the final round of the opening melody the band slows down in the manner of a Russian 'Grand March,' bringing the piece to a proud and majestic conclusion.” --Hankus Netsky

Nonantum Bulgar (Score Only) has been added to your cart

Due to high demand, Nonantum Bulgar (Score Only) is on back order