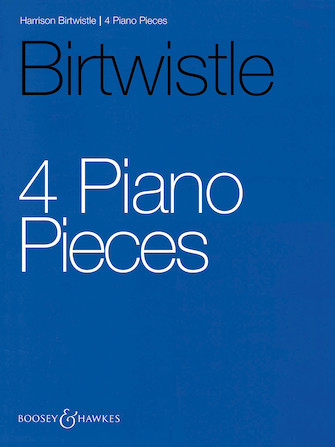 These four short pieces, though simple on the surface, all give glimpses in miniature of the technical ideas which characterise Birtwistle's larger works.

Ostinato with Melody, dedicated to Boulez on his 75th birthday in 2000 and first performed on that very day, superimposes a cantabile melody over the characteristic device of a constantly-changing ostinato.

Written in the same year, Betty Freeman: Her Tango was an 80th birthday present for his American friend and supporter, Betty Freeman, a patron to an astonishing variety of composers. From the rhythm of her name an insistent four-note idea evolved, which the composer acknowledges is perhaps more of a habanera - a tango behind gauze.

Similarly, Saraband: The Kings Farewell distorts the dance implied in its title, never exactly repeating the rhythm of its first bar. It was written in 2001 for Robert Keeley to play at Birtwistle's farewell concert at King's College, London, where he had been Henry Purcell Professor of Composition since 1994.

Written in his mid-teens, Oockooing Bird is Birtwistle's earliest extant composition. He has referred to it as “an adolescent melody” but its modal character and melancholic mood already point to distinctive traits in his later music.

In Broken Images: After the Antiphonal Music of Gabrieli Boosey & Hawkes Scores/Books

4 Piano Pieces has been added to your cart

Due to high demand, 4 Piano Pieces is on back order