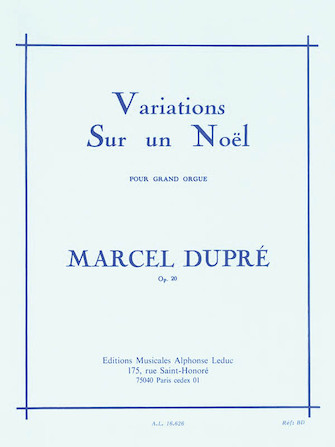 French organist and composer, Marcel Dupré (1886-1971) is also remembered as a significant pedagogue. However, his prominence within the organ repertoire remains absolute with sublime works, including his Variations on a Noel. Dupré studied at the Paris Conservatoire with Louis Vierne and Charles-Marie Widor, where he won prizes for piano, organ and fugue, as well as the Grand Prix de Rome. He was a famous organ virtuoso and was able to perform the entire works composed for the instrument by J. S. Bach from memory. Dupré's Op. 20, the Variations on a Noel for organ was composed in 1922. It is based on an old Noel (Pastorale) in D minor. The variations displays contrast through tonality, rhythm, timbre and harmony, among other aspects. Dupré's compositions and didactic works remain important to organists today and his Variations on a Noel is no exception.

Shall We Gather at the River Fred Bock Publications

Alla Hornpipe from 'The Water Music' Schott Add to Cart

Due to high demand, Variations Sur un Noël pour Grand Orgue is on back order