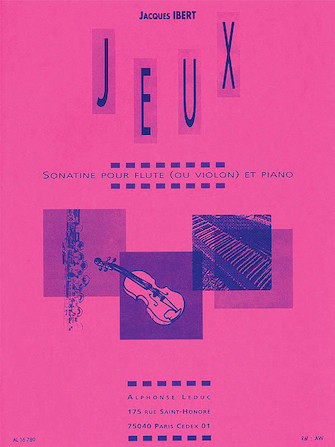 Despite his studies being interrupted by WWI, Jacques Ibert won the Grand Prix de Rome at his first attempt, proving his significant compositional ability, such as his Jeux - Sonatine for Flute (or Violin) and Piano. Jeux was composed towards the beginning of Ibert's professional career, and can be played on either the fute or violin. As suggested by the title, it is an animated and dynamic piece, reflecting the composer's preferred harmonic choices of the Classical tradition, despite developing it in his unique style. Jeux contains two contrasting movements, “Animé” and “Tendre,” utilising the entire range of the flute. Suitable for intermediate- to advanced-level flautists, this Ibert piece is a pleasant and varied addition to the flute's repertoire.

Due to high demand, Jeux – Sonatine pour Flute (ou Violon) et Piano is on back order