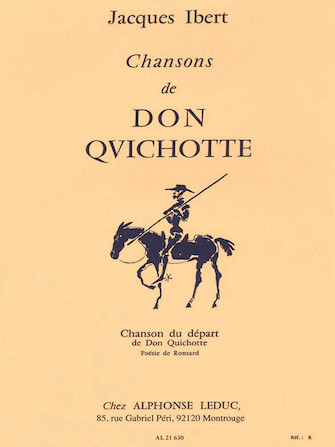 “Jacques Ibert (1890-1962) studied at the Paris Conservatoire before embarking upon a successful composing career. The film Don Quichotte increased his popularity when he composed the musical score in 1933. Controversially, the producers of Don Quichotte asked five composers separately to compose songs for the film. Each composer thought only he had been approached, and when Ibert's music was eventually chosen for the film, it caused him some embarrassment as Maurice Ravel, who had also been approached, was a close friend of his. Song of Departure comes toward the beginning of the film, sung by the the main character, Don Quichotte. Addressing a variety of musical aspects and techniques, Ibert's Song of Departure is a challenging yet evocative addition to the Bass repertoire.”

Chansons De Don Quichotte No. 1 - Chanson Du Depart has been added to your cart

Mozart: At the Piano Henle Music Folios Add to Cart

Due to high demand, Chansons De Don Quichotte No. 1 - Chanson Du Depart is on back order