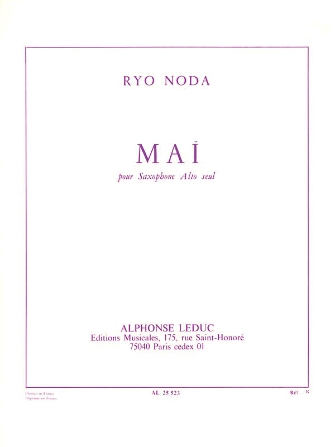 Maï by Ryo Noda, a Japanese composer, is a unique piece of work for solo saxophone that is strongly influenced by Japanese music. With some sonority supposed to be quite close to those of a koto and of a shakuhachi, this piece is very technical and complex to play.

The story behind this work is about the ghost of a Japanese Samurai. While his wife asks why he let her behind and left to fight in the war, he tries to justify his choices. Most of the work depicts the struggle within the mind of the Samurai, between ending his life and living in the end of his enemies. The screaming altissimo at the end is the climax of his struggle which then followed by a 10 second silence that represents his death. The technical abilities required are: large interval leaps, rapid trills, alternate fingerings to achieve pitch bending, multiphonics, altissimo, portamento and cutting tone.

Mai has been added to your cart

Improvisation I Leduc Add to Cart

Due to high demand, Mai is on back order