The Best of Joaquin Rodrigo 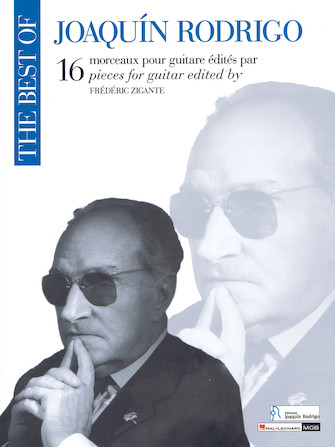 The Best of Joaquin Rodrigo

Joaquín Rodrigo composed works in virtually every genre, from opera to vocal music to chamber music, much of it for solo voices or instruments. Although his works for and with guitar are certainly among the most recognized and performed of his oeuvre, the attention of most players is usually focused on only two or three titles. In addition, there is insufficient scholarly research on Rodrigo's music, and even in performance it has often been forced to suffer a superficial interpretation that tends to ignore the cultural stratification of his compositional process in favour of the music's purely coloristic and virtuosic elements. Rodrigo's works for solo guitar (twenty-three titles including three sonatas) span nearly his entire career, extending from his Sarabanda lejana (a la vihuela de Luis de Milán) in 1926 to Dos pequeñas fantasias (Ecos de Safarad and ¡Qué buen caminito! ) in 1987. The present anthology consists of a selection of Rodrigo's principal solo guitar works, presented in chronological order.

The Best of Leo Brouwer

Bach – Selections from the Lute, Violin, and Cello Suites for Easy Classical Guitar

The Best of Francisco Tárrega in 33 Pieces for Guitar

The Best of Niccolò Paganini: 38 Pieces for Guitar