Vocal Score based on the Critical Edition by Ivano Bettin 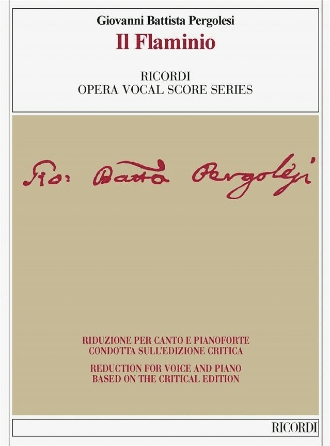 Vocal Score based on the Critical Edition by Ivano Bettin

Some few months after returning to Naples from Rome, where he had gone to follow the premiere of L'Olimpiade at the Teatro Tordinona during the 1735 carnival season, Giovanni Battista Pergolesi -- notwithstanding the quickened pace of the disease that would soon bring his brief life to a close -- presented the public with a new work, Il Flaminio, a “commedeja pe' mmuseca” set to a libretto by Gennarantonio Federico. The opera was staged as the second of season that fall at the Teatro Nuovo sopra Toledo (one of three traditional venues, together with the Teatro dei Fiorentini and the Teatro della Pace, dedicated to the production of opere buffe), where it met with a generally favorable reception. The edition includes a historical Introduction, a description of all the sources considered and a Commentary with critical notes and information related to specific problems of performance practice.

Il Flaminio has been added to your cart

Due to high demand, Il Flaminio is on back order