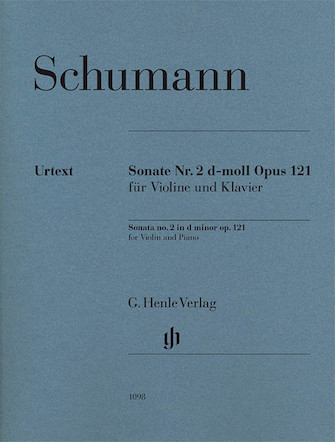 Schumann's second violin sonata was written in October/November 1851, in only a few weeks after the first work for this combination of instruments (HN 428). The highly virtuosic sonata, especially in the finale, is characterised by the close thematic dovetailing of the single movements. Wilhelm Joseph von Wasielewski, who later became the composer's biographer, reported that “smiling in his kind-hearted manner” the composer had said to him: “I did not like the first violin sonata; so I then wrote a second one, which is hopefully better.” Schumann was apparently referring to the great differences in the expressive content: Whereas the first sonata with three movements seems rather melancholy and dark overall, the second “Great Sonata” with four movements is bursting with energy and ends in vibrant Dmajor.

Sonata for Piano and Violin in A Minor Op. 105 Henle Music Folios

Robert Schumann – Violin Sonata No. 2 in D minor, Op. 121 has been added to your cart

Sonata for Piano and Violin in A Minor Op. 105 Henle Music Folios Add to Cart

Due to high demand, Robert Schumann – Violin Sonata No. 2 in D minor, Op. 121 is on back order