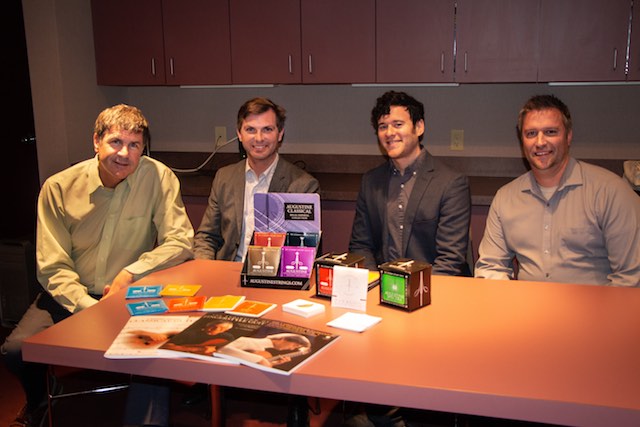 MILWAUKEE--5/21/19--Augustine Strings, the world's first producer of nylon strings for guitar, has granted Hal Leonard exclusive distribution for all of their guitar string products in the United States. The deal, which will begin on June 1, was announced by Stephen Griesgraber, President of Augustine, and Brad Smith, Vice President of MI Products at Hal Leonard.

Founded in New York City in 1947, Augustine Strings first worked in collaboration with guitar maestro Andrés Segovia. Through this initial collaboration, Augustine defined the sound of the classical guitar in the 20th century. Continuing its legacy of innovation, Augustine offers "Cristal" nylon strings in their Regal and Imperial line of strings as well as carbon trebles in their Paragon line to meet the demands of all contemporary players. A full range of strings for acoustic and electric guitar are also available, making them a top-tier line great for all retailers to stock. Their roster of artists includes Grammy award winner Jason Vieaux, Elektra recording artists White Reaper, Eduardo Fernandez, and more.

Known as the world's largest publisher of music education materials, songbooks, and sheet music, Hal Leonard is now also a leading distributor of musical instruments, gear and accessories with a diverse lineup of products. Hal Leonard is adding Augustine Strings to an impressive lineup of other guitar accessories, books, and instruments, including Line 6, Walrus Audio, Morley, Loog Guitars, Hartke, and more.

Griesgraber says, "It was time for us to choose an exclusive distributor. Augustine Strings has two priorities -- to make the best guitar strings in the world and to nurture our market through a commitment to education and community. Hal Leonard understands the needs of retailers in our changing landscape and has decades of experience working closely with educators. Their commitment to excellence in quality and service reflects our own values and we are thrilled to be partnering with them."

Smith added, "Hal Leonard strives to represent the best companies in their field and Augustine Strings certainly qualifies. Our mutual interest in supporting the classical guitar market -- in schools and with professionals -- makes this addition a natural expansion to our growing lines of accessories for fretted instruments."