David Lantz III is originally from Mountain Lake, New Jersey. He graduated with a Bachelor of Science degree in music education from Susquehanna University in Selinsgrove, Pennsylvania. His major instrument was the trombone. He has taught music in all grade levels from K-college, including high school band, chorus, and music theory, junior high school general and choral, and elementary general and choral. Currently, he teaches at East Stroudsburg High School South, where he directs two concert choirs, jazz/show choir, and a select chorale. In addition to choral activities, Dave has developed three levels of music theory, which have contributed a great deal to the success of the choral program. Also, David is the choral director at Stroudsburg United Methodist Church and director of Pocono Summer Chorus, a community chorus in the Pocono Mountains. David is a freelance studio bass player and vocalist, having also played extensively in many resorts and clubs in the tri-state area, both with his own band and with other musicians. While not teaching or playing, he fills his spare time with music publishing activities, including editing, engraving, arranging and composing choral music and occasionally conducting choral reading sessions. He has nearly 300 choral octavos in print with Shawnee Press as well as many other publishers throughout the United States. David is a member of PMEA and ACDA. As a member of ASCAP, he has won many writers awards. David resides in Sciota, Pennsylvania, with his wife, Marti Lunn Lantz (also a published composer and lyricist) and six children. 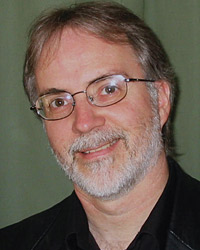