Doreen Rao's distinguished career as conductor and master teacher links the standards of professional performance with the goals of music education. Celebrated for her spirited and moving concerts, Rao's commitment to choral music education is recognized in her innovative programming, teaching initiatives, worldwide conducting appearances and her award winning publications with Boosey & Hawkes. Doreen Rao holds the University of Toronto Elmer Iseler Chair in Conducting. As the Director of Choral Programs, Dr. Rao founded the Faculty of Music's Centre for Advanced Studies in Choral Music which supports and enriches the Faculty's ensemble and conducting programs, hosts the Elmer Iseler Singers and sponsors the International Bach Festival with Helmuth Rilling. Rao conducts the award-winning University of Toronto MacMillan Singers and Chamber Choirs. Her young ensembles collaborate regularly with the Toronto Symphony Orchestra and a roster of internationally celebrated artists and educators. She leads the University's graduate program in conducting performance and teaches graduate research and philosophy courses related to music performance in education. Recognized as one of the world's leading experts on children and youth choirs, Doreen Rao founded and chaired the ACDA National Committee for Children's Choirs, pioneering work that inspired the children's choir movement in America. In a national tribute presented to her by the American Choral Director's Association, eminent American conductor Robert Shaw wrote, "The world of choral music owes her special thanks. She is preparing our future." During Rao's long association with the Chicago Symphony Chorus, she served as assistant conductor to her mentor Margaret Hillis and prepared choruses for concerts and Grammy Award-winning recordings with Sir Georg Solti, Claudio Abbado, and James Levine. Her choirs also performed on numerous occasions with Leonard Slatkin and the St. Louis Symphony Orchestra, and with Helmuth Rilling at the Oregon Bach Festival. The Phi Mu Alpha Sinfonia awarded her with their National Citation for her significant and lasting contribution to the cause of American music. She has been honored by the American Choral Director's Association for her commitment to choral excellence. A CBS television documentary called her musical achievements "extraordinary." Following her undergraduate education at the University of Illinois, Rao spent the first years of her career in Chicago singing professionally and teaching choral music in the schools. She served as Music Director and Conductor of the Glen Ellyn Children's Chorus, an ensemble that performed and recorded regularly with the Chicago Symphony Orchestra and Chorus. Following graduate studies at Northwestern University, she joined the Voice Faculty at Roosevelt University's Chicago Musical College where she performed and taught voice and choral music before accepting an invitation to conduct the Northwestern University Chorus and complete her doctoral studies in philosophy and aesthetics. Rao's innovative Sing with the Symphony school and family concerts were first introduced by the Toronto Symphony Orchestra to actively involve audiences in listening as performers. In a pioneering career of "firsts," Rao conducts honor choirs, all-state choirs and festival choirs for numerous national and international conferences, associations and performance organizations around the world. Most recently she enjoyed conducting the inspired young Texas All-State Chorus with Orchestra for the Texas Music Educators Association. Doreen Rao is the Founding Director of the CME Institute for Choral Teacher Education, an internationally acclaimed professional development program for conductors, composers, choirs and teachers. She is the Artistic Director and Conductor of the New Millennium Festival Concerts, an innovative peacemaking initiative with concert series in New York, Toronto and London. 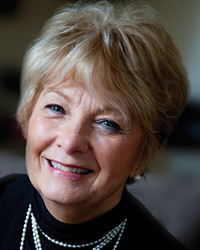