Over the past two decades, Linda Spevacek has become one of the most successful composers in modern choral music. She has sold more than 7 million copies of over 700 published compositions and arrangements. Linda has continued to keep her compositions original and creative while maintaining the consistency and integrity that has given her a world-renowned reputation. Dynamic, inspiring, creative and expressive are just a few words that describe the level of excellence found in every Linda Spevacek composition, arrangement, seminar and reading session. In addition, singers from all over the world performed her arrangements twice on the nationally televised MENC World's Largest Concert on PBS. Several of her works have been premiered at annual conventions of the American Choral Directors Association, the Music Educators National Conference and on the Hour of Power at the Crystal Cathedral. Linda was a featured conductor at Carnegie Hall in New York in 1999. Her work has won repeated awards from the American Society of Composers, Authors and Publishers (ASCAP) in recognition of her outstanding achievements and success. She has composed commissions for many large massed groups around the country (many of these compositions have become signature pieces for the choirs). In addition to membership in ASCAP, Linda is a member of The American Choral Director's Association (ACDA), The Music Educators National Convention (MENC), the National Teachers of Singing (NATS), and Sigma Alpha Iota (SAI), a professional sorority of women musicians. In addition to her published titles, she has authored seven choral collections, five piano books and six vocal collections. Linda's energy and devotion to working with singers at all levels have resulted in numerous invitations as guest conductor for various national, state, regional and choir, church, and school honor festivals. Linda's schedule includes conducting, judging and teaching across the United States and Canada. Linda has an education degree from the University of Wisconsin in Madison with her primary emphasis on voice, piano and theory. She has since worked extensively with elementary, junior and senior high school choirs, community choirs consisting of youth, high school, college and adult levels as well as church choirs of all sizes and denominations. Linda is one of the most sought after judges, workshop and reading session clinicians in the country. Her dynamic clinic presentations include a variety of topics from vocal technique, creative programming, teaching musical sensitivity through literature, success with the non-singer, recruiting and teaching males, editing accompaniments, composing a mini-opera, creative workshops combining youth/adult choirs, working and recruiting the male singer and a motivational/inspirational sessions. Linda pursues her full time writing career from her home. She lives in Phoenix, AZ where she maintains a diverse voice studio. 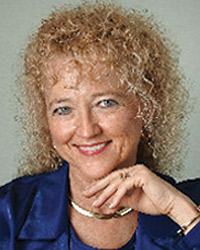