Walter Rodby (1917-2005), internationally recognized composer, arranger, conductor and music education received his first public school education on Minnesota’s Mesabi Iron Range, where he graduated from high school and junior college. He continued his music education at the University of Northern Iowa, Trinity College of Music, and London University and received his advanced degrees from Teachers College, Columbia University, in New York City. During his studies in London, he was a member of the Royal Choral Society, directed by Sir Malcolm Sargent, and for two years while at Columbia University, he sang with the celebrated Collegiate Chorale under the baton of Maestro Robert Shaw. In 1959, Mr. Rodby was elected to ASCAP, the American Society of Composers, Authors and Publishers. His compositions and arrangements, numbering 350, including nine music books, have been published by 19 American and European publishers. Mr. Rodby taught and directed music groups, primarily vocal, in three high schools and 15 colleges and universities. For over thirty years, he wrote a monthly column “The Choral Folio” for the School Musician Magazine, an internationally circulated publication for the school and church market. Mr. Rodby conducted over 150 festivals and workshops and reading sessions in 20 states and his articles appeared in a dozen state and national periodicals. Mr. Rodby provided significant leadership in every music organization to which he has held membership, including President, Illinois Music Educators Association; President, Chicago Choral Conductors Guild; and President of the Illinois Chapter of the American Choral Directors Association. From 1970 to 1977, on four separate occasions, he organized and conducted concert tours featuring a 100-voice high school choir, in 12 European countries, including Greece and the Soviet Union. Mr. Rodby was a WWII veteran, and as a U.S. Army Infantry Officer (Captain), he served as Ammunition and Bomb Disposal Officer with the 66th (Panther) Division in Europe. He was awarded the Bronze Star, The Combat Infantryman’s Badge, and two EAME Theatre ribbons. Upon his release from active duty, Captain Rodby served 27 years in the Army reserves, and in 1965, he was promoted to full colonel. Upon his retirement, he received the Meritorious Service Medal. In 1998, he received a special plaque from the Department of Defense WWII Commemoration Committee for “outstanding service” for composing and conducting a special celebratory anthem honoring the 50th anniversary of the end of WWII, performed at the famous Punch Bowl Cemetery, Honolulu, Hawaii on November 11, 1977. Mr. Rodby’s awards and honors were many, and included the coveted Steinway Award, the Illinois Music Educators Distinguished Service Award, the Harold A. Decker Award from the Illinois Chapter of the American Choral Directors Association, Cook County Teacher of the Year award, and the National Arts Associate Award from Sigma Alpha Iota, International Music Fraternity, at their 1984 National Convention in Chicago. In 1997, he was inducted into the HALL OF FAME of his hometown, Virginia, Minnesota. 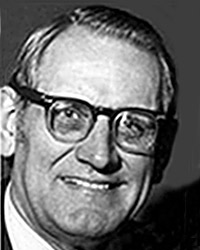