Janet Gardner earned her Bachelor’s degree in music education from Concordia College in Moorhead, Minnesota.  During her 33 years of teaching elementary general music in Montevideo, Minnesota, she facilitated workshops at various state universities and was a clinician at a number of state music conventions.  She was a featured composer/clinician at various music clinics in the United States and Canada.

Janet was chosen to receive the 1995 Minnesota Music Classroom Teacher of the Year  award, and served as the Minnesota Elementary Composition Contest Chairperson for six years.

Janet has written a number of school musicals and choral octavos with Shawnee Press and other major publishers.  She has received numerous ASCAP awards for her works.  Retired from teaching, Janet and her husband, Dave, reside in Montevideo, Minnesota. 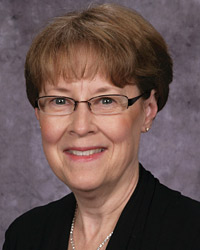