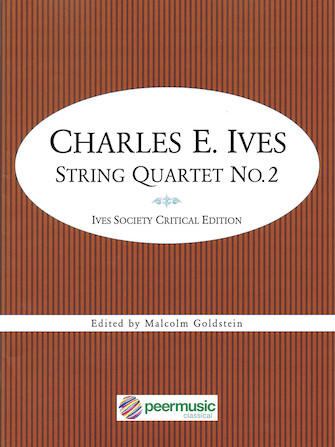 Ives wrote that in the course of the work, the performers “converse, discuss, argue (in RE 'politick'), fight, shake hands shut up -then walk up the mountain side to view the firmament!”

Ives's comments in the score highlight the conversational nature of the 1st and 2nd movements. He recalls friends from his post-collegiate days and pokes fun at the academic, conservative musicians of his day - all depicted in the music. The arguments in Mvt. 2 can get heated, but the quartet put it all aside in the transcendent finale.

The manuscript pages for the quartet are available for study online, at http://peer.ms/ives2stqt

“The Second String Quartet is one of Ives's richest and most original works, on several counts. One is its programmatic conception, and the realization of it in sound. Another is its projection of a kind of musical discourse the implications of which are still being worked through by composers. A third is the musical work as a whole, one of Ives's most subtly integrated, panoramically envisioned, and organically achieved.” - H.Wiley Hitchcock, in Ives: A Survey of the Music

String Quartet No. 2 has been added to your cart

Due to high demand, String Quartet No. 2 is on back order