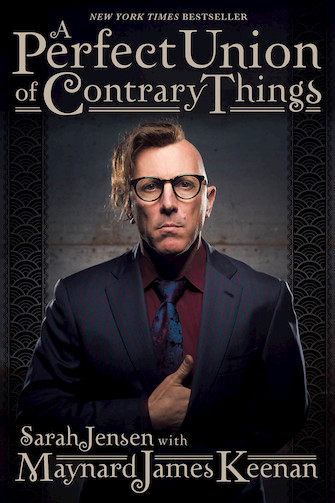 Actor, performer, musician, entrepreneur, winemaker, athlete, writer, curious adventurer – Maynard James Keenan is the embodiment of the archetypal artist. Best known as the vocalist in award-winning groups Tool, A Perfect Circle, and Puscifer, he has trusted the path he's followed and heeded his inner voice, ever open to synchronicities and unexpected turnings along the way.

Until now, fans of Maynard James Keenan – or MJK, as he is often called – have had access to only an abridged version of his story. In A Perfect Union of Contrary Things, Keenan partners with his friend of 30 years, Sarah Jensen, to present a full account of his life and career. From his Midwest childhood to his years in the army to his time in art school – and from his stint at a Boston pet shop to his place in the international spotlight and his influence on contemporary music and regional winemaking – the book chronicles the events that led MJK to take one step after the next, to change direction, to explore sometimes surprising opportunities.

Included are sidebars in his own words, often humorous anecdotes that illuminate the narrative, as well as commentary by his family members, friends, instructors, and industry colleagues. It also features a foreword by Alex Grey, an American visionary artist and longtime friend of Keenan, along with a bounty photos of Keenan from childhood to the present.

A comprehensive portrayal of a versatile and dedicated artist, A Perfect Union of Contrary Things pays homage to the people and places that shaped the man and his art. A New York Times Bestseller in hardcover, it is presented here for the first time in paperback.