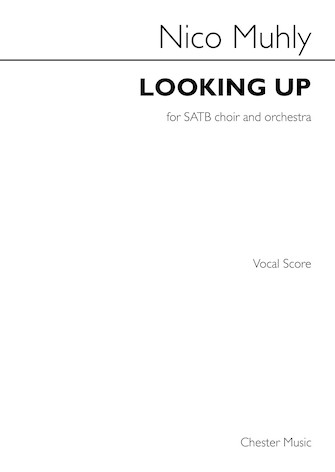 Looking Up is a piece for large chorus and orchestra, and is in three sections, played without pause. In the 16th century, a variety of psalters in meter were printed in England, with the idea of making psalm-singing something that could happen easily at home, with the rhyming meter being an aid to memorization. These translations are wonderful exercises in brevity and sometimes clumsy rhymemaking, and were usually prefaced by a lengthy explanation as to their merits; the title of one of the first such volumes in English is: The Psalter of Dauid newely translated into Englysh metre in such sort that it maye the more decently, and wyth more delyte of the mynde, be reade and songe of al men. I thought it would be appropriate to set one of these introductions, and the first section of Looking Up sets the preface to Thomas Ravenscrofts psalter (1621), in which he writes: “The singing of Psalmes (assay the Doctors) comforteth the sorrowfull, pacifieth the angry, strengtheneth the weake, humbleth the proud, gladdeth the humble, stirres up the slow, reconcileth enemies, lifteth up the heart to heavenly things, and uniteth the Creature to his Creator.”

It begins meditatively, but eventually grows agitated and fervent, with a vision of the “quire of Angels and Saints” “redoubling anddescanting” - an ecstatic and terrifying vision of the skies opening up. Ravenscroft then encourages the use of instrumental musicfor worship, at which point, a long, acrobatic orchestral interlude with jagged edges antagonizes the choir, who sing a kind of private, anxious meditation on two pitches.

One of the most delicious biblical texts is an Apocryphal prayer known as the Benedicite or the Prayer of the Three Children (the same who were rescued by an angel after King Nebuchadnezzar tried to have them burnt in an oven for not bowing to his image). The text is repetitive, obsessive, and a gift to composers - each line is an invocation of an element of the natural world, followed by the phrase, “blesse ye the Lord, praise him & magnify him for ever.” In Looking Up, the setting begins with three solo voices, and then grows to include the whole choir, itemizing the whole of creation. The idea that these boys are spared from the furnace and then five minutes later are saying, “O ye the fire and warming heate, blesse ye the Lord...” has always felt very loaded to me, and the orchestra plays with this conflict between joyful praise and a more terrible (in the 16th-century sense) awefor the divine.

The text for the third, and shortest, section is taken from Christopher Smart's (1722-1771) A Song to David, purportedly written during his confinement in a mental asylum. This ode to King David points out how David, as the author of some of the Psalms, observes the whole world from the “clustering spheres” to the “nosegay in the vale.”

The Place of Understanding