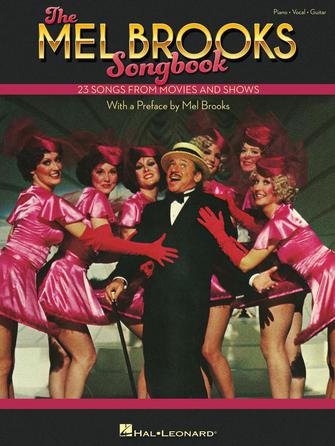 The great comedy filmmaker Mel Brooks wrote a song for his first movie, The Producers (1967). “It was the first real song I had ever written and I did it in a day.” He would continue to write songs for The Twelve Chairs, Blazing Saddles, High Anxiety, To Be or Not to Be, The History of the World Part 1, Spaceballs, and Robin Hood: Men in Tights. More songs were written for the Broadway musical versions of The Producers and Young Frankenstein.

The composer/lyricist personally chose the songs for The Mel Brooks Songbook, which includes several photo stills from movies. It marks the first time several songs have ever been published, including “The French Mistake” (Blazing Saddles), “I'm Tired” (Blazing Saddles), “The Inquisition” (The History of the World Part 1), and “Men in Tights” (Robin Hood: Men in Tights).

When making The Twelve Chairs Mel Brooks realized, “it needed a title song for the opening credits sequence. I confessed to my wife, Anne Bancroft, that it was big stuff–a grand emotional song that would capture the insanity, furor, and heartbreak of the film! I thought it was probably beyond me. 'Nonsense!' she yelled, 'Go up to the attic and write the title song and don't come back till you have it.' I dutifully went to the attic, sat down, and was blessed with 'Hope for the Best, Expect the Worst.' In my not-so-humble opinion, maybe the best lyrics I've ever written.”

The 23 songs in this collection have been arranged for piano and voice with guitar chord frames.

Sunday in the Park with George – Revised Edition Vocal Selections

The Mel Brooks Songbook has been added to your cart

Christmas at the Movies Piano Solo Songbook Add to Cart

Due to high demand, The Mel Brooks Songbook is on back order