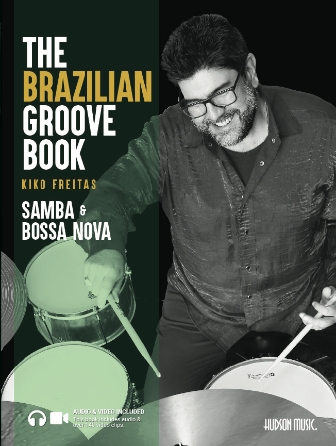 Kiko Freitas shares his expertise and love of the rhythms of his home country of Brazil in this inspiring and enlightening look at samba. Starting with a breakdown of the layers of samba, Kiko presents independence ideas using tamborim rhythms, batucada patterns, left hand and left foot independence concepts, odd-meter tamborim rhythms, and an approach to the samba snare drum. From there the material expands to include partido alto, using the brushes in samba, samba/funk, and samba school concepts. The book concludes with polyrhythmic ideas applied to samba. All of the content is explained in detail, accompanied by Kiko's special method of vocalizing rhythms during practice.

The package includes over 115 videos covering dozens of the examples and variations in the book, plus 4 play-along tracks.

Kiko Freitas has been performing with Brazilian legend João Bosco for over twenty years, and has also performed with Michel Legrand, Nico Assumpção, Milton Nascimento, Chico Buarque, Frank Gambale, Lee Ritenour, John Patitucci, and many others. He has presented many clinics in Brazil and around the world, participating as a teacher at schools and events including National Brazilian Drummers Festival, Curso Internacional de Verão-EMB, Stockholm Royal Academy of Music (Sweden), and California Jazz Conservatory (USA), among many other places. Kiko was voted Best Drummer in World Music by Modern Drummer magazine in 2019.

Mark Guiliana – Exploring Your Creativity on the Drumset

Benny Greb – The Language of Drumming: A System for Musical Expression