for Violin and Piano 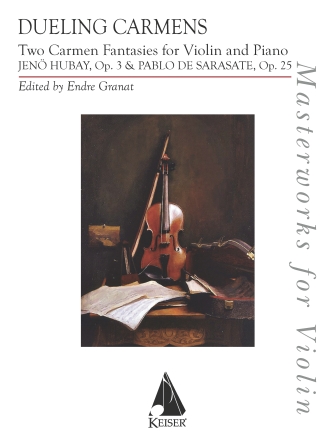 for Violin and Piano

“Georges Bizet's opera Carmen had its first performance in Paris in 1875. In the audience was the 17-year-old Hungarian violin virtuoso and budding composer Jenö Hubay. After the performance Hubay started writing his Carmen Fantasy from memory. The following season for his debut recital in Paris, he included his newly created composition. It is a lyrical work of great beauty and brilliance. Hubay combined his career of a concertizing virtuoso, composer and violin pedagogue. At the Royal Conservatory in Brussels he became the successor of Vieuxtemps and Wieniawski. Later, Franz Liszt invited Hubay to lead the violin department in the newly created Budapest Music Academy. He created the world-renowned Hungarian school of violin playing. His student, Franz von Vecsey, recorded theCarmen Fantasy in 1904 at age 11! His other students included Joseph Szigeti, Zoltán Szekely, Sándor Végh, Endre Gertler, György Garay and many more. Hubay was a very active composer, creating over 120 works including operas, ballets, concertos, songs and instrumental compositions.

Pablo de Sarasate wrote his Carmen Fantasy in 1882. It is a composition of drama and passion, written with his unparalleled brilliance for violin writing. This work has remained in the standard repertory, on programs of virtuoso soloists, as well as a required work for major competitions.”

Dueling Carmens: Two Carmen Fantasies by Hubay and Sarasate has been added to your cart

Due to high demand, Dueling Carmens: Two Carmen Fantasies by Hubay and Sarasate is on back order