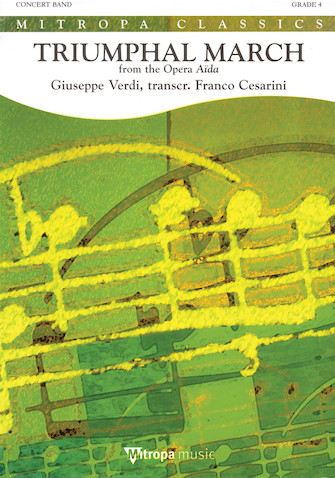 The Gran Finale from the second act of Verdi's famous opera Aida, composed in 1869, is a complex part of the drama as in one single scene many different characters, all with contrasting emotions, appear on stage at the same time. The scene opens in Ancient Egypt when the Egyptian general Radames and his troops, which have just beaten Ethiopia, come marching in. The Egyptians sing a celebration song for him and there is a sound of trumpets playing the triumphal march to receive the hero. The well-known triumphal march, transcribed in this edition for concert band by Franco Cesarini, closely follows Verdi's original score and will bring any concert to a dramatic close.