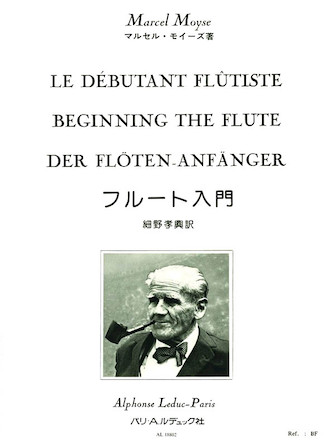 Written by the French flautist and composer Marcel Moyse, Beginning the Flute is a method for flute beginners. Created as a supplement for other existing methods such as Taffanel-Gaubert, Gariboldi, or Remusat, Beginning the Flute works as an introductory ABC and provides the beginner with preliminary exercises. These 26 pages consist of thirteen lessons in two pages, the first one to learn the technique and to develop a good sonority and the second to progress with these. If the player encounters difficulties with tempo or breathing for example, they could work on the first page of each lesson and come back later on the second ones, once more technique has been acquired. Considered as a maestro by some musicians, Marcel Moyse (1889-1984) has composed many flute methods and exercise books that are also published by Alphonse Leduc, such as Gammes et Arpèges (1933), De la Sonorité (1934) and Mécanisme-Chromatisme (1927). His methods are widely used and recognised worldwide.

Beginning the Flute has been added to your cart

Due to high demand, Beginning the Flute is on back order