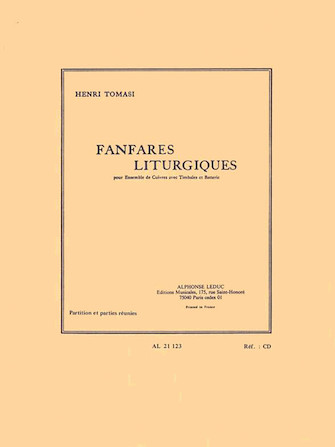 “French composer and conductor, Henri Tomasi (1901-1971) published Liturgical Fanfares in 1952. As with his other wind compositions, Liturgical Fanfares was well-received by audiences. Tomasi was born in Marseille, but his Father and Mother were originally from La Casinca in Corsica. Despite being pressured into musical studies by his parents, Tomasi dreamed of becoming a sailor, and during the summer he stayed with his Grandmother in Corsica where he learnt traditional Corsican songs. However, in 1921, he began his studies at the Paris Conservatoire and went on to become a high profile composer and conductor. Tomasi did not forget his Corsican routes, often incorporating themes of the songs he had learnt during the summers with his Grandmother into his compositions. Composed for an unusual instrumentation of Brass Ensemble, Timpani and Drums, Liturgical Fanfares comprises four movements; 1) Annunciation, 2) Gospel, 3) Apocalypse, and 4) Good Friday Procession. This Tomasi piece is suitable to advanced players and provides an exciting, alternative addition to the ensemble repertoire.”

Liturgical Fanfares, For Brass Ensemble, Timpani And Drums has been added to your cart

Divertimento for Brass and Percussion Brass Ensemble Add to Cart

Due to high demand, Liturgical Fanfares, For Brass Ensemble, Timpani And Drums is on back order