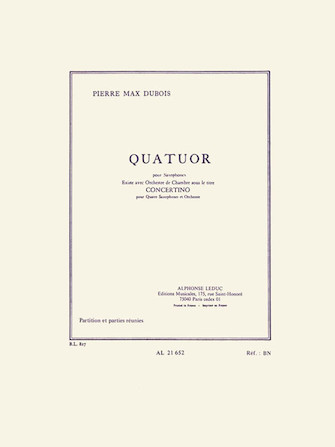 “Quartet by Pierre Max Dubois is a piece for four Saxophones also known as Concertino initially composed for four Saxophones and a String Orchestra. The scores for all Saxophones are part of this edition, with a set of all four Saxophones scores. It is considered as difficult it requires strong endurance and a good technique. This Quartet is divided into four distinct movements : 1. Ouverture Brillante 2. Dolorospo 3. Spirituoso 4. Andante Pierre Max Dubois (1930-1995) is a French composer who was awarded the Prix de Rome in 1955. Mainly composing classical music, his works are mainly for woodwinds. He is one of the founder of Les Six, which included his professor, Darius Milhaud.”

Procession For Trombone And Piano Leduc

Quartet (saxophones) has been added to your cart

Due to high demand, Quartet (saxophones) is on back order