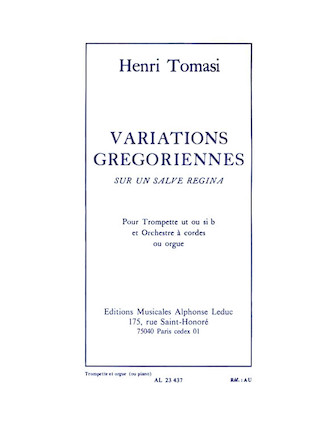 “French composer and conductor, Henri Tomasi (1901-1971) published Gregorian Variations on a Salve Ragina 1964. As with his other wind compositions, Gregorian Variations for Trumpet and String Orchestra and Organ reduction was well-received by audiences. Tomasi was born in Marseille, but his Father and Mother were originally from La Casinca in Corsica. Despite being pressured in to musical studies by his parents, Tomasi dreamed of becoming a sailor, and during the summer, he stayed with his Grandmother in Corsica where he learnt traditional Corsican songs. However, in 1921, he began his studies at the Paris Conservatoire and went on to become a high profile composer and conductor. Tomasi did not forget his Corsican routes, often incorporating themes of the songs he had learnt during the summers with his Grandmother into his compositions. Gregorian Variations on a Salve Regina is a highly unusual and modern work based on an old Marian Hymn (a song for the Virgin Mary). The variations exploit tonality, rhythm and structure amongst other aspects. This Tomasi piece is suitable for advanced trumpeters, providing an exciting, alternative addition to the instrument's repertoire.”

Nobody Knows De Trouble I See Schott Add to Cart

Due to high demand, Variations Gregoriennes Sur Un Salve Regina (trumpet & Piano Or Organ) is on back order