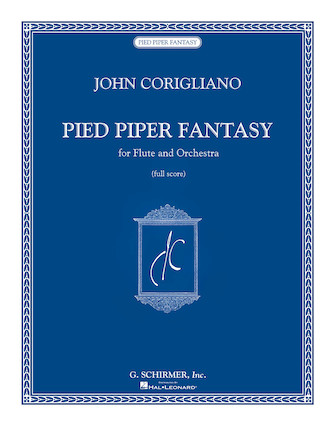 This seven movement flute concerto, premiered in 1981, is based on the Robert Browning story-poem of the piece's title. Corigliano recharacterized the Piper as an adolescent, who begins the score with power and control: it's only in discovering his personal theme that he's able to lead both the rats and the children. The finale of the concerto is driven by the Piper's desire to protect the children from parents who are as negligent of their young as they are dishonest in their business dealings. His is not just a siren song but a call to sanctuary. Pied Piper Fantasy was later expanded to the full-length ballet score The Pied Piper, premiered by American Ballet Theater in 2001. 40 minutes.

Fantasia on an Ostinato Piano Solo

Fancy on a Bach Air String

Suite in B Minor Woodwind Solo

Pied Piper Fantasy has been added to your cart

Suite in B Minor Woodwind Solo Add to Cart