Revised and Edited by Robert Orledge 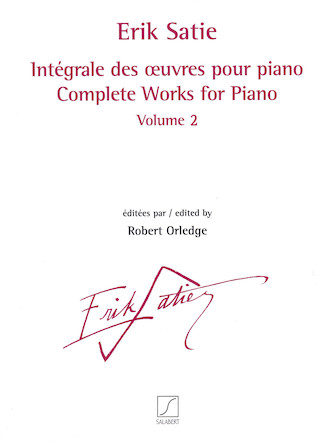 Revised and Edited by Robert Orledge

This new, completely revised and reset centenary edition of Satie s complete piano music in three volumes has returned to Satie's manuscripts and first editions to give pianists completely accurate and reliable texts to play from. As well as presenting every piece for piano solo or piano reduction that Satie published, this edition also includes some previously unknown pieces, like the Petite Sonate that he wrote for Vincent d Indy at the Schola Cantorum, as well as some interesting first versions of well-known pieces, like San Bernardo, a trial version of Españaña (1913) and the markedly different first version of Les Pantins dansent (1914). In addition, there are examples of the different types of exercises that Satie completed at the Schola between 1905 and 1912, some extra trial Enfantines, and some earlier drafts of his famous Sports et divertissements. To help pianists, suggested metronome marks have been added throughout, and there are also some performance suggestions for the Rose+Croix pieces of the 1890s, which otherwise appear to be all quiet and slow. The notation has been made as user-friendly as possible, without detracting from Satie's concerns about the extériorisation of his musical thought in print.

Satie for the Guitar

The Best of Erik Satie