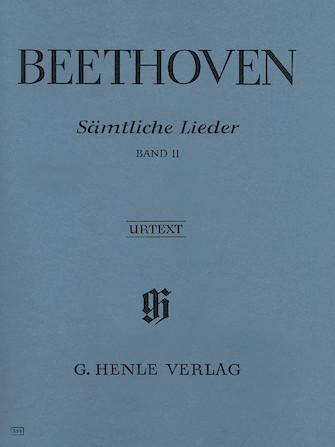 Beethoven's importance as the creator of monumental orchestral works and of substantial chamber music and solo sonatas is so great that his rich song oeuvre is often hardly even noticed. But his lieder offer a highly entertaining repertoire in which love songs and humorous songs alternate with serious pieces of philosophical or religious subject matter. Goethe, Claudius, Herder, Lessing, Gellert and Rousseau are among the authors whose poems he set. In this way, we are offered a panorama of the waning 18th and incipient 19th centuries with a specific blend of feeling for nature, Enlightenment though and religious sensibility. This Henle Urtext edition in two volumes, which is based on the Beethoven Complete Edition, also contains those songs which were rediscovered long after Beethoven's death and were therefore hardly known for a long tme. A detailed preface on the history and source situation of Beethoven's art songs rounds off this edition.

Complete Songs for Voice and Piano – Volume I

To the Distant Beloved, Op. 98

Concerto for Piano and Orchestra B Flat Major Op. 19, No. 2

Concerto for Piano and Orchestra C Major Op. 15, No. 1

Exercises – Studies in Form of Free Variations on a Theme by Beethoven Anh. F 25

Songs for Voice and Piano