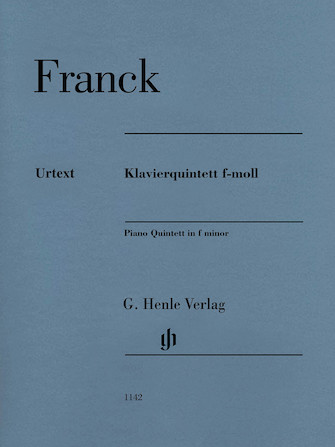 This work, composed in 1878/79, alternates between chamber music intimacy and symphonic opulence, and marks the beginning of a series of significant late works by César Franck. Its composition was partly prompted by the successful performance of Franck's youthful piano trios at the “Société nationale de musique” (founded in 1871), and probably also by a composition competition for works using this instrumental combination whose deadline Franck then went on to miss. The Quintet was received coolly at its first performance in January 1880, and it was performed just a few more times during the composers lifetime. It was only in the 20th century that audiences and critics came to recognise this work as a major milestone in the history of French chamber music, and it now adorns the Henle catalogue in a new Urtext edition.

Seek Thou This Soul of Mine Shawnee Press

Sonata for Violoncello and Piano No. 2 in F Major, Op. 123 Henle Music Folios

First 50 Classical Pieces You Should Play on the Violin Misc

Piano Quintet in F minor has been added to your cart

Sonata for Violoncello and Piano No. 2 in F Major, Op. 123 Henle Music Folios Add to Cart

Exercises – Studies in Form of Free Variations on a Theme by Beethoven Anh. F 25 Henle Music Folios Add to Cart