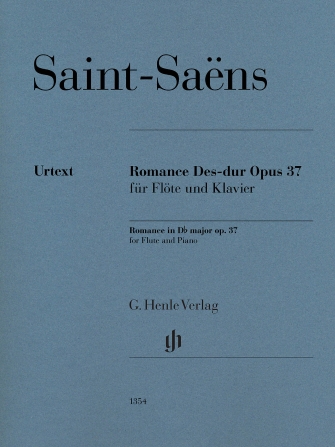 The Romance for a melodic instrument and piano was a very popular genre in French salon music of the nineteenth century. Saint-Saëns also wrote several such pieces for violin, cello, and horn. His only Romance for flute was composed in 1871, shortly after the Société nationale de musique had been founded. It was premiered in this new forum for piano music and chamber works a year later, too. In spite of its brevity, the piece contains numerous harmonic and melodic refinements, which rapidly made it popular among flautists - both in the original setting with piano accompaniment as well as in the later orchestral version. The Henle Urtext edition is the first critical edition of this piece, which is also very popular with learners of the flute.

Suite from The River Peermusic Classical

Romance in D-Flat Major, Op. 37 has been added to your cart

Suite from The River Peermusic Classical Add to Cart

Due to high demand, Romance in D-Flat Major, Op. 37 is on back order