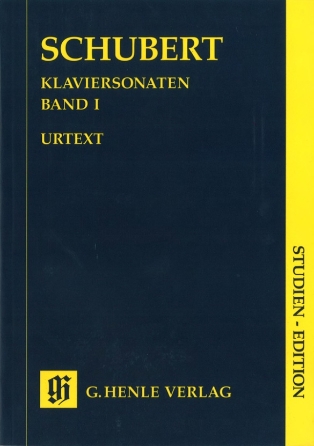 Schubert's 22 piano sonatas sketch a very illuminating picture of the prematurely departed composer's compositional path. From te first essays of the gifted young 16- to 19-year-old, one can trace a continuous development leading to the five great sonatas which he wrote in the years 1823 and 1826, and finally to the three masterworks written shortly before his death, which place him on a level with Beethoven as a composer of sonatas.

Volume I of the three-volume Henle Urtext edition of Franz Schubert's piano sonatas contains seven sonatas from the two earlier periods as well, which all became known with opus numbers. Only two were published during Schuber's lifetime. The book opens with what is no doubt the best-known sonata of these two periods, the A Major Sonata D 664 op. post. 120. Given the length of time between the composition of each – 1817, 1823, 1825 – the works present a great diversity of forms and expression.

Sonata for Piano and Arpeggione A minor D 821 (Op. Posth.)